Posted on April 1, 2015 by Michelle LaRiviere

Rupi Kaur’s project about menstruation for a “visual rhetoric course” at the University of Waterloo has got people hopping – they’re hopping mad, hopping disgusted, hopping completely missing the point. We’re talking young and old, men and women, a range of backgrounds, you name it. Everybody’s got something to say. 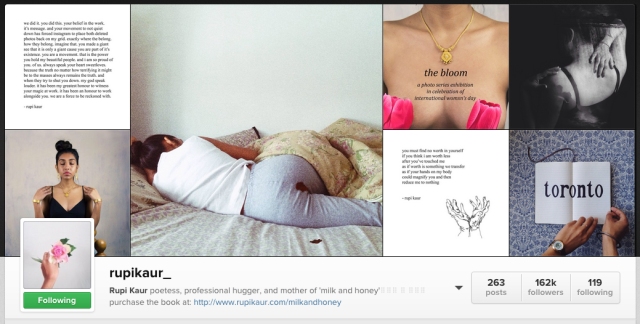 In a nutshell, things began to heat up when PetaPixel published a story last week (as did the Washington Post) about how a photo on Kaur’s Instagram account was censored and taken down. It depicts a fully clothed woman with a blood stain on her pants. After reading the articles, I went to her website to learn more about the project. The verdict? I get it – no judgement here.

Social media did not exist when I was a student in the 90s, so our audience was extremely limited. Trust me, you do NOT want to know some of the projects my classmates came up with for our course assignments. But times have changed. Kaur is a published poet and a public figure with a large following on Instagram. She knows what she’s doing.

I should explain here that the purpose of this article is not to analyze Kaur’s project or the rationale behind it, but to examine the public’s reaction to the photograph. While Kaur stated that Instagram had proved her point, I can’t help but wonder how she is handling the public backlash. In the first days she wrote:

“Thank you @instagram, for providing me with the exact response my work was created to critique … when your pages are filled with countless photos/accounts where women (so many who are underage) are objectified. Pornified. And treated less than human. Thank you.”

Despite a not insignificant number of supporters rallying behind Kaur, the comment sections across the board are pretty grim:

“That’s just nasty. Whoever is calling it art is a pretentious weirdo. Periods are gross. And I don’t want to think about them or look at some chicks bloody snatch for gods sake! She needs to hit the shower, pronto! This is far from art…it’s unhygienic! And it kinda creeps me out that some people are digging it.” (… by a woman.)

“It’s only natural and she has a point on her response to instagram. She turns it into feminist propaganda and attacks men by way of blaming misogyny. Shame because she made a good argument until her dislike of men was brought into it.” (… by a man.)

Yep… that’s just a sampling. The first thing I observed was the common theme of using analogies for the monthly “period” (either to emphasize disgust, or to expand what could legitimately be called art in a facetious way) by comparing it to shit, semen, and even erections. Reactions were pretty extreme, but one thing was clear – few in this rabid army of commentators had actually bothered to read the articles or learn more about the project, and if they had, they still insisted on blindly reacting to one photograph randomly singled out and taken out of its original context.

If anything, the voracity of this collective outrage underscores the huge dichotomy between efforts to promote positive body image in young women, and societal pressures to perpetuate self-loathing and shame.

Without question, the outrage is hugely disproportionate to the situation, especially given the daily dosage of rape, murder, and gore heaped upon us in graphic detail through television and other media on a daily basis. To frame it another way, everyone is freaking out about a couple of blood stains without even stopping for a moment to wonder why we don’t react in the same manner when a hockey player ends up with blood on his jersey or on the ice. After all, blood is blood, right?

Other notable consequences which have arisen from a controversial photo [topic] taken out of context, are 1) that the whole concept of “what is art” has come under attack, and 2) discussions about taboos rooted in patriarchal systems are erroneously perceived as critiques against men, thus branding feminists as man-haters. Nothing could be further from the truth. It is precisely this type of dangerous thinking that got fourteen women murdered at École Polytechnique de Montréal (1989).

In order to verify whether this was true, I decided to search Instagram for explicit content. Well, surprise! I had no trouble finding plenty of tits and ass, to put it crudely, including come-fuck-me crotch closeups and yes, even hard-ons. I apologize for the language, but it’s the only way to describe the tone of what I saw – lewd and pretty much X-Rated. It is perplexing how some things get a free pass, and other things don’t. By the way, the example here is mild compared to some of what’s on Instagram, but you get the picture. 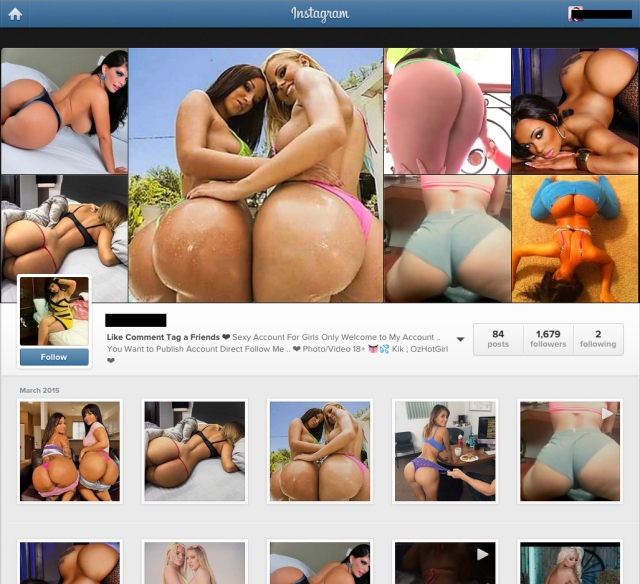 In conclusion, sometimes ART (in Kaur’s case, conceptual art in the form of a photographic essay) is simply about pointing out glaring inconsistencies in our society – for example that the overt sexualization and objectification of women and girls is somehow acceptable, but challenging the shaming taboos directed at women and girls is not. Hmmm… I’d sure like to know how Kaur’s work would have been received if each photo of a woman had been juxtaposed with the photo of a man with blood on his shirt or pants.

[Sigh]… if the comment sections in newspapers and social media are any indication, then it seems we’ve made very little progress as an evolved species. The North American education system has FAILED where arts, culture, critical thinking, and intelligent discourse are concerned. The K-12 curriculum is largely a mechanism designed for the corporate grooming of children with little regard for the value or role of arts literacy in sustaining a vibrant and thriving society.

University education, for those who seek it, is about learning to think outside the box, to push the boundaries, and to develop critical thinking skills through research, reflection, and discourse. The assignments and resulting projects are exercises through which young people learn and evolve, first as insightful human beings, and secondly as artists with much to offer the world, not just at a local level, but on a global scale. If we cannot discuss biology and negative cultural constructs in a calm and civilized manner, then what are we left with? I think we’ve already seen the answer.