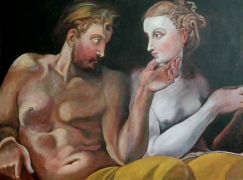 Ulysses and Penelope (After Primaticcio)

Portraiture was my first love as a young artist. I copied characters from Archie comics, then later graduated to teen magazines. My first realistic portrait was a drawing of the queen in pencil, which I copied from a one dollar bill. Oil paints opened up a whole new world for me, and I’ve done several commissions over the years. Although my concentration has been on digital and photo-based work the last few years, I have plans to do a series of figurative works on paper and canvas in the near future.

3 Responses to Portraits in Oil