Sometimes we get knocked down. For a while. We lay there, supine, gazing at the world with hazy longing while an invisible anvil pins us to the bottom of an indifferent river. An eternity ticks by in slowww-motion, tick, tick, while a hundred sunrises and a hundred sunsets quietly stain the sky. But today is a new day . . .

Forty years ago I fled the family nest, which had been uprooted in the early 60s from Detroit to a remote mining town in northern Ontario. It was always my intention to leave, but I visited often over the years, somehow believing that it’s the one who left who must always make the effort.

Guilt. It can play crazy tricks with the mind. But guilt for leaving a sad place that was never yours is absurd… especially in that moment when black ice sends your car careening through three feet of powder toward a frozen ravine while your baby screams in terror. The absurd has stubbornly lingered over time… but the gods were with us that day.

Thanksgiving. My brother traveled a thousand kilometres in late November for a long-awaited reunion with our family clan in Windsor and Detroit. Cancer and other setbacks had delayed his visit, but here he was at long last. My beautiful, brave, sensitive brother, ravaged by illness and radiation. A survivor. He stayed for five wonderful days – we talked, drank, laughed, and cried, but mostly we marvelled that we had made it this far. As a parting gift, I gave him our father’s helmet [1].

Melancholia. This thing that I naively thought I was leaving behind, in a small mining town so long ago, turned out to be a merciless stalker. Forty years, and thirty moves… apartments, houses, towns and cities. Lots of them, but still… the shadow persists. Just the other night I dreamt that I got the keys to a new apartment (right next door to my son and his family) – one with big windows, a parquet dance floor, and space to paint large canvases. I awoke with a lingering sense of joy that was gone before noon. And then this article from Brain Pickings crossed my path, What Depression Is Really Like. Van Gogh describes it well.

Reflection. I think for the first time in my life, I’m finally getting it. The moving thing. Endlessly running from the “black dog” with a carefully crafted rationale obscuring the truth. The truth. I cried for seven hours on this last U-Haul road trip in 2014, the flood-gates unleashed during a farewell hug after breakfast with my best friend, Kelly, in the parking lot at Burger World. Christ, I weep just thinking about it. Writing does that. It brings you to your core.

[Postscript] ** After publishing this post I realized the irony in the title, Still Standing. Detroit (the backdrop in the photo) is currently rising out of a long, dark period, and reinventing itself. I love that!! 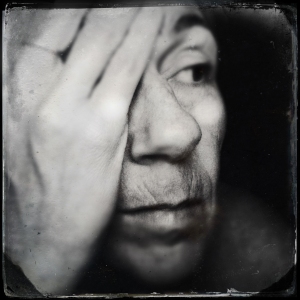 Thinking, feeling, seeing
newness in oldness,
beauty in a soul laid bare,
freedom to embrace it all.

WHAT IS IT about old daguerreotypes, ambrotypes (collodion positives), and tintypes that still fascinates us nearly two hundred years after they were invented and replaced by more advanced technologies?

The daguerreotype was originally developed by early 19th century artists searching for a method to reproduce prints and drawings for lithography. The technique inadvertently contributed to the birth of photography, and we haven’t stopped taking pictures since – now more than ever before with the ubiquitousness of mobile technology.

But still, there is something arresting about antique portraits when we peer into the faces of people who are nothing more than strangers to us. The images have a certain depth and mystery that we rarely see in today’s fast-paced, social media, selfie-obsessed culture. So what’s the deal?

After much thinking on this, I finally realized a surprising truth that proves that technology shapes the content (and meaning) of creative expression. This happens because inherent physical and technological limitations have always determined the creative parameters and output of any technology. To use a modern example, the **selfie-stick expanded the previously limited photographic range of smartphones (from arm’s length selfies) to make it look like maybe somebody else took your picture and you’re not such a narcissist after all. Just kidding, but you get the picture.

Challenges in 1830s photography were different, but still had an effect on creative content. Long exposure times required the sitter(s) to keep very still while the plate was being exposed inside the camera. The process could take up to several minutes. Consequently, the body and facial expressions had to remain as still and relaxed as possible. Any movement, including blinking, would cause some amount of blurring in the photo. These types of poses were, out of necessity, the standard “look” of photographs at the time. But in analyzing this a little further, we observe a curious side-effect vis-a-vis content that completely transcends the physical or mechanical.

The effect that super-long exposure times had in portraiture was that it unwittingly dissolved the protective masks behind which humans conceal their inner lives. It peeled away the public persona we all unconsciously project to the outer world (think social media, where we carefully craft the best versions of ourselves). Like a microscope, it allowed the first cameras to peer inside the hearts and minds of husbands, wives, children, and others who had endured much – both good and bad. Nobody said “cheeeeese,” and without a practiced “camera face” camouflaging the features of these perpetually solemn people, we occasionally recognize in the photos a hint of something familiar – be it pride, bitterness, hardship, or whatever. We instantly know it by the set of the jaw, the tightness of the lips, or a twinkle in the eyes. There is nothing fake about the authenticity of these “leaked” emotions. In light of this knowledge, we should certainly be asking ourselves how modern technology is shaping content and meaning in our culture today, and how it may be affecting our values and habits.

I HAVE A CONFESSION to make. I’m not young anymore, and I’ve lived with depression for most of my life. When it comes on, it usually lasts for weeks and months at a time… and I don’t have a good poker face, if you know what I mean. On the positive side, I’ve learned to socialize more, rather than isolate like I used to, because it’s healthy and good for me (doctor’s orders.) My friends like to take a lot of photos when we’re together, which is usually fun. Anyway, (and this is the confession part) I’ve noticed in some photos a deep sadness etched across my face, especially in the eyes, and it’s almost too painful to look at. I thought this might be some unfortunate new development in my outward appearance, but oddly, it would appear that it was always the case (as you can tell by this professional portrait taken of me as a child the year of my father’s death). But then again, maybe it’s just that my adult mask has begun to dissolve as I transition slowly into a wise, but weathered crone. That might be it.

AS AN ARTIST, I’ve often used myself in my work because, well, I’m available 24/7, but mainly because my inner experience has always been the subject of my art – no matter the medium. Currently, I am using the Tintype Snappack from Hipstamatic to create pseudo-tintype photos, and creating double-exposure portraits as part of a new project. The combined effect of this medium + content is a good fit and creates exactly the right mood  – honest and vulnerable in its naked truth. Stay tuned for updates. 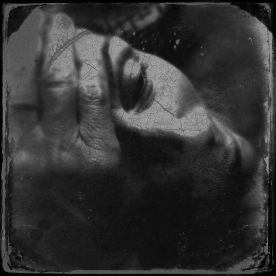 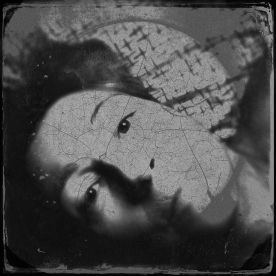 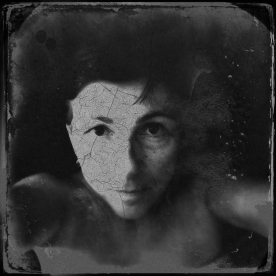 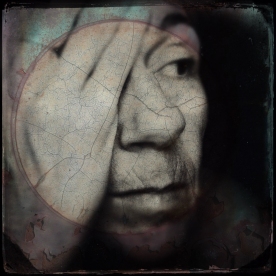 **Disclaimer: I do not own a selfie-stick and only saw them for the first time while camping in Bruce Peninsula National Park about six weeks ago. 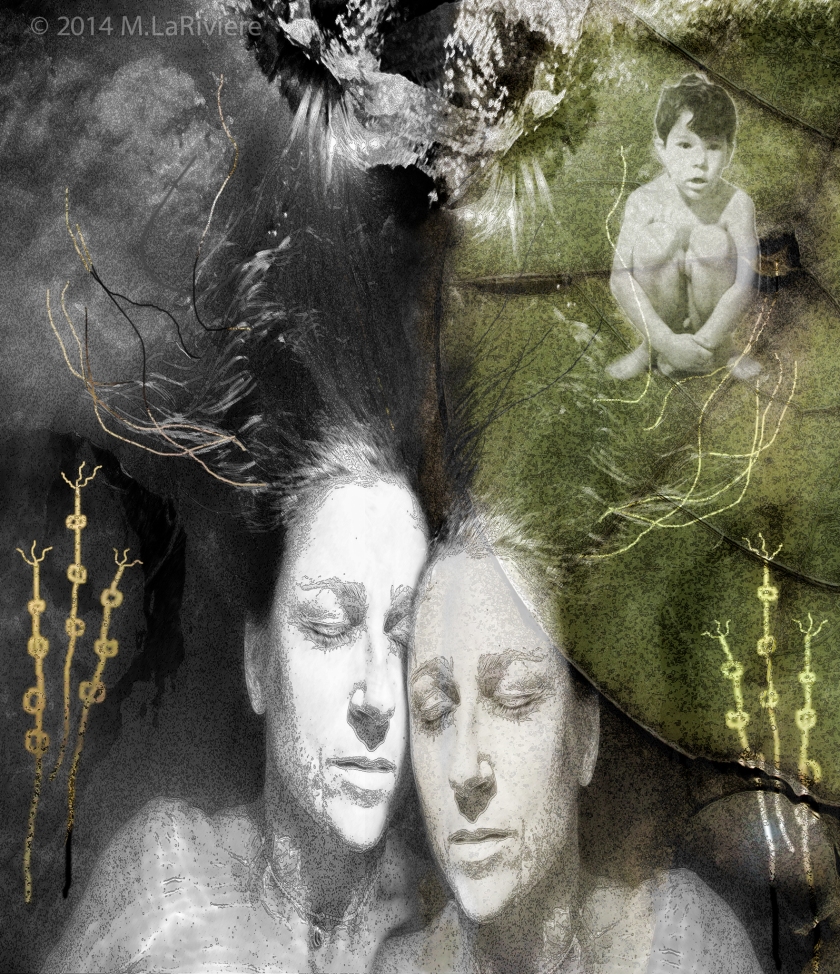 My whole world lurches sideways –
familiar days and plans
tumble violently from grasp,
dates and weeks flounder
in the murk of confusion,
and I’m falling,
falling again –
I can no longer make sense of June,
or how long it will take to get to the end of it.

I know you didn’t mean to, but your words
wrenched my heart so roughly
it’s seeping again – I can’t help it.
It’s an old wound, really,
shaped by the story of a thousand cuts
that began before
we both were born.
It’s not your fault,
but a little tenderness
would do a lot for the mending.
It’s funny how a tiny prick
can bring you to your knees
while a single hard blow
doesn’t always do the trick.

But the wind is cruel and merciless –
sirens sent us all scurrying underground
while the house shook and groaned
in the middle of the night.
On the way down I grabbed
things that might vanish,
or that I might need
if everything came to an end
in the end –
chilled water
tattered leash
sensible shoes
passport that may very well outlive me
flashlight to find my way through the rubble
and oh yes,
a clean pair of underwear.
I sat near the washing machine
on the stool with the wheels
and the tray underneath
with my head in my hands
wondering what to do.
A spider approached from across the room
and stopped right in front of me.
We sized each other up
while I reminded myself
that she probably had pretty eyes
and did good work
in the studio that I never use.
I even thought we could be friends
until I moved my leg
and scared the crap out of her.
She made a beeline for the workbench
at lightning speed
and I realized the thunder
was slowly fading.
I’m still wondering
what she was trying to tell me.

I know you didn’t mean it,
but I’m staring at July
through vaseline eyes
and still can’t quite get a grip
on what it is that I’m supposed to do.
I could throw me a rope
but time escapes
like an eel through fingers
and honestly,
I can’t feel the bottom anymore,
but my friends are holding my head
above water.

Sirens send us all to the basement
while the house shakes and groans
in the middle of the night.