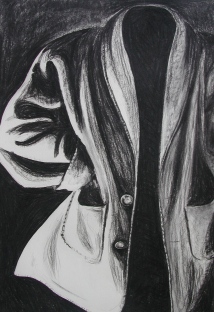 Trapped in my Mind

I began taking a serious interest in drawing at an early age, first copying characters from Archie comics, then later graduating to teen magazines. My first realistic portrait was a drawing of the queen in pencil, which I copied from a one dollar bill. My Uncle Red told me just a few years ago that my late father was an amazing artist. While I remember the drawings he made of a doctor fish when my guppies had babies, my uncle recalls him as a passionate story-teller, and on occasion, unable to remember someone’s name, he would draw the person on a scrap of paper and everyone would recognize immediately who he was talking about. Artistic talent runs in our blood apparently.

On my own artistic journey, I discovered technical pens in the mid ’80s and began creating very tight pen and ink line drawings. For a while I was obsessed with pointillism, placing each dot carefully so that no two touched each other. It was labour intense, and my artistic repertoire gradually expanded over time. Haven’t touched my Rapidograph pens in years! Cat is a recent pastel portrait of my daughter-in-law, and Masked Woman is a work in progress.